Battle of Peleliu 75th Anniversary Commemoration at the WWII Memorial

A brief ceremony to mark the 75th anniversary of the U.S. Marines' two-month struggle to capture the island of Peleliu. 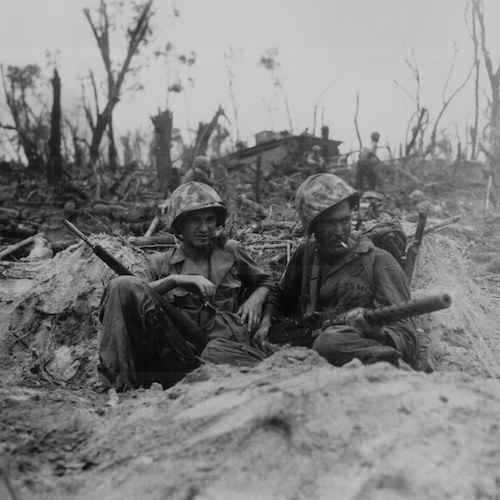 On September 15, 1944, Marines of the 1st Marine Division began a two-month struggle to capture the Palauan island of Peleliu. While succeeding in moving American lines closer to the Philippines, this battle was one of the bitterest of the war, causing some of the highest casualty rates logged by Marine units.

When American troops secured the Marianas Islands, Admiral Chester Nimitz’s Pacific Fleet inched ever closer to one of its ultimate objectives: the Philippines. Yet before an amphibious invasion would take place there, commanders planned to capture Japanese strongholds within the islands of Palau. Enemy planes on the Palauan island of Peleliu could harass nearby American forces if left unchecked, and the island’s airfield could potentially provide tactical support for the imminent invasion of the Philippines. On the morning of September 15, 1944, Marines of the seasoned 1st Marine Division landed on Peleliu. Despite fierce opposition, the landing troops secured a beachhead by the end of the first day and the island’s airfield within five days. This early success, however, came at an astounding cost, with early casualty rates in some units exceeding 50 percent. A stalemate soon arose as a result of a new Japanese defensive strategy. Peleliu’s defenders connected the island’s natural caves with an elaborate network of tunnels, which allowed Japanese troops to attack the advancing Marines from anywhere on the island, including from areas just cleared. Elements of the Army’s 81st Infantry Division were sent to reinforce the battered Marines facing horrid combat and devastating casualties. As American pilots made use of the island’s airfield nearby, soldiers and Marines slowly burned the vicious Japanese resistance out of their caves on Peleliu’s Umurbrogol Mountain, dubbed “Bloody Nose Ridge” by the men who fought on it. After over two months of brutal fighting, Peleliu was finally declared secure on November 27.
The Battle of Peleliu is remembered by Marines as one of the bitterest battles of the war due to its staggering casualty rates. While some may retroactively doubt the campaign’s strategic impact on the liberation of the Philippines, to the soldiers and Marines who captured Peleliu, the battle was a hard-fought victory that taught them many harsh lessons about how to fight against Japanese bastions, lessons that they would take with them into their next battles.
During the September 15th ceremony at the World War II Memorial, WWII veterans will present a wreath at the Pacific Arch of the Memorial in honor of the nearly 48,000 Americans who served and the nearly 11,000 killed or wounded during the Battle of Peleliu.
If you are a World War II veteran, or know of one, who would like to participate in the Battle of Peleliu 75th Anniversary Commemoration at the Memorial, please email hrotondi@wwiimemorialfriends.org!
We hope you'll join us on September 15th at the WWII Memorial!