A ceremony to mark, in the Atlantic Theater, the largest airborne operation of the war and, in the Pacific Theater, a stepping stone to liberating the Philippines. 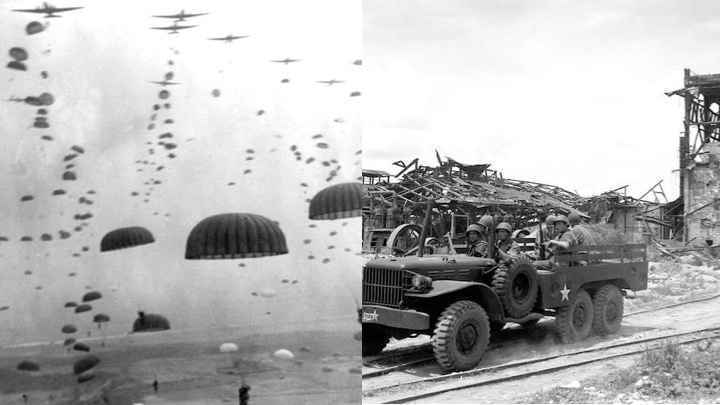 On Tuesday, September 17th at 11:30 a.m., the Friends of the National World War II Memorial will hold a ceremony and wreath presentation at the National World War II Memorial to mark the 75th anniversaries of Operation Market Garden, the largest airborne operation of the war, and the Battle of Angaur, a stepping stone to liberating the Philippines.

During the September 17th ceremony at the World War II Memorial, WWII veterans and representatives of our Allied Nations will present wreaths at the Atlantic and Pacific Arches of the Memorial in remembrance of the more than 17,000 Allies killed, wounded, or missing during Operation Market Garden and the more than 1,600 Americans killed or wounded during the Battle of Angaur.

If you are a World War II veteran, or know of one, who would like to participate in the Operation Market Garden and Battle of Angaur 75th Anniversary Commemorations at the Memorial, please email hrotondi@wwiimemorialfriends.org!
We hope you'll join us on September 17th at the WWII Memorial!

On September 17, 1944, the Allies launched Operation Market-Garden, deploying airborne and armored forces to capture key bridges in the Netherlands and open a route across the Rhine. This bold gamble ultimately failed, leaving the Allies to find another way through Germany’s western defenses.

Following Allied successes in France, the retreating German Wehrmacht shifted to the defensive. Dug in behind the formidable “Siegfried Line” along Germany’s western border, the Germans had no intention of retreating any further. Facing this foreboding obstacle, Field Marshall Bernard Montgomery devised a plan to flank this line to its north through the Netherlands and across the Rhine, securing key water crossings and highways along the way and opening a pathway into the Ruhr, an industrial region vital to German production. In the early afternoon on September 17, 1944, Montgomery’s ambitious plan, Operation Market-Garden, was underway. This campaign was technically two operations combined. As OperationMarket, several thousand paratroopers and glidermen of the 101st and 82nd Airborne Divisions and British and Polish airborne elements hit the ground behind German lines near the Dutch towns of Eindhoven, Nijmegen, and Arnhem. From their landing zones, paratroopers fought to capture several key crossings, attempting to clear a narrow corridor. The following operation, codenamed Garden, dispatched British armor to link up with the British paratroopers near Arnhem by pushing through this narrow corridor, dubbed “Hell’s Highway” by the men who had to secure it. Despite early successes, stiffening German resistance, along with a lack of reinforcement due to bad weather, soon slowed armored progress and weakened airborne control of the corridor. Further, British paratroopers were dropped too far from the operation’s critical objective—the “bridge too far” at Arnhem— and failed to capture the crossing. By September 23, facing heavy casualties and losing control of the field, the Allies began to withdraw. On the night of the 25th, the last of the British troops near Arnhem slipped back to the Allied lines across the Rhine, while those who did not escape across the Rhine were captured by the Germans.

Operation Market-Garden was the largest airborne operation of the war, yet this first campaign into the Rhineland failed to secure a route through the German defensive line at a steep cost of Allied lives. The Allies would have to figure out another way to penetrate the Siegfried Line.

BATTLE OF ANGAUR
On September 17, 1944, the 81st Infantry Division continued the campaign for Palau by invading the island of Angaur. While the Marines wrestled for control of the neighboring island of Peleliu, the troops on Angaur successfully fought to capture the island as a potential stepping stone to the Philippines.
With the Marianas Islands firmly in friendly hands, American commanders looked to find a position even closer to the Philippines that could position American planes closer within range of the assault. The small island chain of Palau seemed to offer just such an option, given its relative close proximity to the islands. Indeed, the defending Japanese forces had already constructed an airfield on the Palauan island of Peleliu, and Angaur, a smaller island to Peleliu’s southwest, possessed terrain that could be converted into additional runways. Following the Marine amphibious landings on Peleliu two days prior, the Army’s greenhorn 81s tInfantry Division hit the beaches of Angaur on September 17, 1944. Facing comparatively sporadic opposition, the landing troops made rapid progress across the island. By September 20, Angaur was clear enough for airfield construction to begin and for some elements of the 81st to instead reinforce the battered Marines on Peleliu. However, Angaur was not yet fully secure, as Japanese defenders continued to harass American troops from the island’s numerous caves. After days of harsh fighting, some soldiers resorted to using bulldozers to seal off the entrances of these caves, thus avoiding the treacherous task of clearing the positions. Armed with this innovation, American troops were able to neutralize most resistance on Angaur by the end of the month, with monotonous mop-up actions continuing through early October. While securing Angaur, the men of the 81st gained valuable combat experience and, more importantly, learned how to innovate on the battlefield to match Japanese tactics. Soon, these men would have a chance to apply what they learned on Angaur during the long-anticipated invasion of the Philippines. Although the airfields on Angaur were not completed in time for the invasion, these bases would support the later stages of the campaign on the Philippines.