A brief ceremony to mark the 75th anniversary one of the first and longest battles to take place on German soil. 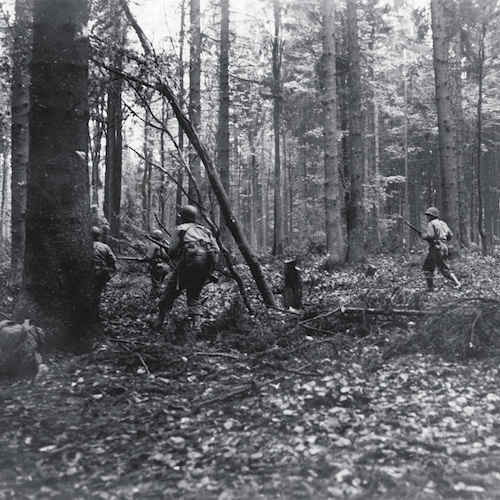 The Battle of Hürtgen Forest, which began on September 19, 1944, was a series of engagements fought through mid-December for control of the forest on Germany’s border with Belgium. The campaign failed to break the German defensive lines, with heavy casualties lost for only marginal gains.

By fall of 1944, Allied success in expelling German troops from France left soldiers confident that victory was within reach. However, the German Wehrmacht was not about to admit defeat, instead taking the defensive to exhaust the Allies of men and supplies before German positions collapsed. Germany’s main defensive line was the heavily fortified “Siegfried Line” along the nation’s western border. At the center of this line was the Hürtgen Forest, a dense forest of fir trees and rough terrain ideally suited for defense. German forces augmented this favorable ground with minefields and artificial obstacles. In September, some Allied elements fought to penetrate the Siegfried Line. Lt. Gen. Courtney H. Hodges planned to drive his First Army through the Hürtgen Forest, with the hopes of capturing its roads and dams to prevent the Germans from moving through or flooding nearby areas. However, after a series of battles, Allied leaders failed to learn the dangers of a campaign through the forest. On September 19, 1944, the 9th Infantry Division tried to attack through the forest and capture its road network, yet it withdrew after bloody brushes with German defenders. In early October, the 9th resumed its push towards the German city of Schmidt, only gaining three thousand yards at the price of 4,500 casualties. By the end of the month, the crippled 9th was replaced by the fresh 28th Infantry Division, who managed to reach the town. However, ruthless German armored attacks forced the division out in early November, inflicting astounding casualties. By midmonth, the 28th too was replaced. Before long, the 1st, 4th, and 8th Infantry Divisions, the 47th Infantry Regiment, 2nd Ranger Battalion, and parts of the 5th Armored Division, were all thrown into the fray. While the Allies made progress to the north, the forest remained an ominous challenge, with success of later actions measurable in mere yards. It was only the German counterattacks into the Ardennes that halted the ill-fated battle.

Although one of the first and longest to take place on German soil, the battle did not open a path through the Siegfried Line as intended. It would not be until after the Battle of the Bulge that the Allies would secure such a path and finally move beyond the Hürtgen Forest.

During the September 19th ceremony at the World War II Memorial, WWII veterans will present a wreath at the Atlantic Arch of the Memorial in honor of the nearly more than 33,000 Americans killed or wounded during the Battle of Hürtgen Forest.

If you are a World War II veteran, or know of one, who would like to participate in the Battle of Hürtgen Forest 75th Anniversary Commemoration at the Memorial, please email hrotondi@wwiimemorialfriends.org!
We hope you'll join us on September 19th at the WWII Memorial!