A brief ceremony to mark the 75th anniversary of the last major German offensive of World War II on the Western Front. 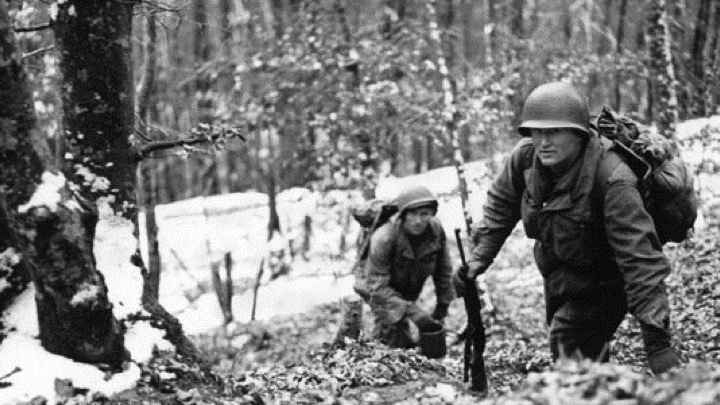 In the early hours of January 1, 1945, the Germans launched Operation Nordwind into the Alsace region, the last major German offensive on their Western Front. By the end of the month, with only minimal gains to show against hard Allied resistance, the German campaign was forfeited, leaving the Allies free to continue their push into Germany.

Although German planners hoped their Ardennes Offensive would turn the tide of the Western Front back to their favor, unrelenting Allied resistance there left them looking for another way to regain ground. The proposed new offensive, codenamed Operation Nordwind (North Wind), would be launched south of the Ardennes in Alsace, intended to take advantage of the transfer of American troops northward to relieve Bastogne. If successful, this operation hoped to split Allied lines near Strasbourg. After the surprise of the Ardennes Offensive, the Allies were expecting continued German aggression nearby and were aware of enemy activity in Alsace before it began. Initially, General Eisenhower, who feared that the thin Allied lines in Alsace could not withstand an enemy attack, ordered the American Seventh Army to withdraw west to the Vosges Mountains, effectively yielding the historic city of Strasbourg liberated only a month prior. Yet after a bitter quarrel with Free French General Charles de Gaulle, who was appalled to hear plans to abandon the cultural center, Eisenhower revised the order and designated the French First Army to defend the town. In the final hours of 1944, Operation Nordwind began with German attacks against Seventh Army forces near the town of Bitche. These efforts were met by constant American counterattacks, supported by French armor and Allied airpower. After four days of hard fighting in frigid temperatures, this main arm of the offensive stalled. Meanwhile, to the east of the city, German attacks took advantage of heavy fog and thick forests to quickly hit the American lines. This advance came within ten miles of Saverne, yet it too was slowed by Allied resistance. To secure their positions, American commanders shuffled units from elsewhere along the lines to plug holes and block advance routes. By January 5, the German advances failed to break Allied lines or capture vital terrain, rendering Nordwind an early failure. However, with the Ardennes bulge collapsing, German forces continued to attack Alsace as an alternative, and a division pushed across the Rhine to the south to take a ten-mile bridgehead near Gambsheim, just north of Strasbourg. Days later, another attack pushed through the Haguenau Forest. Despite German forces sending in reserve units to make small progress, American armored divisions filled the holes. Through the night of January 24-25, Allied counterattacks ironed out many of the German penetrations. Facing only menial gains at a huge human cost, Hitler was forced to abandon his Alsace offensive and transferred many of the involved units to the Eastern Front, where Germany’s position was even more precarious.

Although some may view the fighting in Alsace as less dramatic than the nearby action in the Ardennes, the battle was nevertheless a decisive Allied victory. While Hitler had hoped that his offensives in the Ardennes and Alsace would breathe new life into the German war effort, the costs incurred during these efforts were dire and proved too costly for the Germans to pay, greatly hindering their defense capabilities. Estimates of German casualties double Allied numbers, while frigid temperatures put their fair share of casualties in hospitals on both sides. Despite a brief squabble over the defense of Strasbourg, the Allies overcame Operation Nordwind, and Alsace and Strasbourg remained in Allied hands. In the spring, they could continue chasing their final objective: the capture of Germany itself.

During the January 1st ceremony at the World War II Memorial, we will present wreaths at the Atlantic Arch of the Memorial in honor of the nearly 800,000 American and French who served and in remembrance of the more than 12,000 killed or wounded during Operation Nordwind.

If you are a World War II veteran, or know of one, who would like to participate in the Operation Nordwind 75th Anniversary Commemoration at the Memorial, please email hrotondi@wwiimemorialfriends.org!

We hope you'll join us on January 1st at the WWII Memorial!


Generous support has also been provided by the Albert and Ethel Herzstein Charitable Foundation and Worthington Industries.