A brief ceremony to mark the 75th anniversary of the U.S. Marines' amphibious assault to capture the Japanese-held island of Iwo Jima. 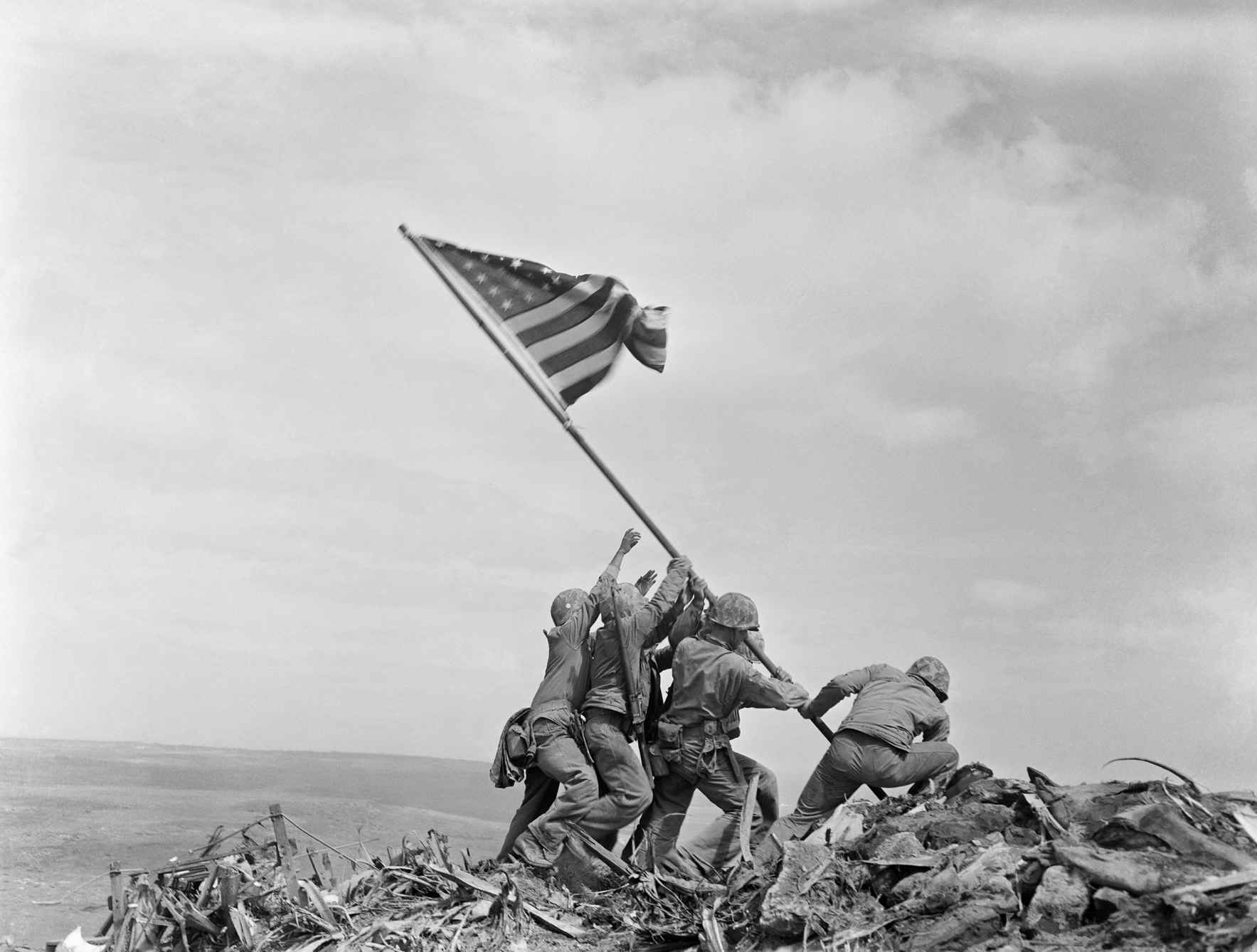 On Wednesday, February 19th at 11:30 a.m., the Friends of the National World War II Memorial will hold a brief ceremony and wreath presentation at the National World War II Memorial to mark the 75th anniversary of the Battle of Iwo Jima, a U.S. amphibious assault to capture the Japanese-held island of Iwo Jima. This 36-day battle resulted in a hard-fought American victory that caused many casualties, and the action remains an iconic symbol of American and Marine fighting spirit.

Joining Friends in marking the anniversary of this significant battle will be General Mark A. Milley, chairman of the Joint Chiefs of Staff. General Milley’s father, Alexander Milley, served with the U.S. Marines in the Battle of Iwo Jima.

During the February 19th ceremony at the World War II Memorial, WWII veterans, General Milley, and special guests will present wreaths at the Pacific Arch of the Memorial in honor of the 110,000 U.S. Marines, U.S. Soldiers, U.S. Navy corpsmen, Seabees, U.S. Army Air Forces personnel, and others who served and in remembrance of the more than 26,000 killed or wounded during the Battle of Iwo Jima.

If you are a World War II veteran, or know of one, who would like to participate in the Battle of Iwo Jima 75th Anniversary Commemoration at the Memorial, please email hrotondi@wwiimemorialfriends.org!

We hope you'll join us on February 19th at the WWII Memorial!

Learn more about the Battle of Iwo Jima below.

When Allied forces captured the Marianas Islands, strategists were hopeful that airfields there could serve as launch sites for long-range B-29 Superfortress bombers to conduct strategic bombing against Tokyo. Yet the distance proved too long for Allied escort fighters to follow, and enemy fighters hindered the effectiveness of early raids. Iwo Jima, a small, porkchop-shaped island located between Japan and the Marianas, held three airfields that Japanese fighters had been using to intercept the bombers. If captured, these airfields could provide a base for Allied escorts. Allied planners had long viewed Iwo Jima, part of the Tokyo Prefecture, as a useful first steppingstone towards the Japanese home islands, but the role the island could play in bombing missions underscored the urgency of its capture. The 20,000 Japanese troops on Iwo Jima, who were anticipating an attack, transformed the island’s defenses into a castle, equipped with pillboxes and gun emplacements and connected with trenches and tunnels throughout the island. The island’s inert 500-foot volcanic peak, Mount Suribachi, was established as a lookout post and artillery and mortar hub. American leaders knew that the fight for Iwo Jima would be a difficult one that would inflict many casualties, so three capable Marine divisions – the 3rd, 4th, and 5th Marine Divisions – were assigned to the island’s assault, which was codenamed Operation Detachment.

On the morning of February 19, 1945, after naval and air preparatory bombing, the first wave of Marines hit the southern shores of Iwo Jima, although shifting volcanic ash slowed their progress from the start. While Japanese resistance was minor when the Marines began coming ashore, once they moved beyond the landing beaches, the Japanese trap was triggered. Japanese rifle, machine gun, artillery, and mortar fire zeroed in on the exposed positions and pummeled the Marines without any cover, causing serious casualties. Despite fierce resistance, the veteran Marines on the beach calmed their unseasoned comrades and prevented panic. By the end of the first day, 30,000 Marines were ashore on Iwo Jima and a beachhead smaller than anticipated was nevertheless captured, but these achievements were bought with some 2,000 casualties. The next day, the Marines began slowly pushing, almost rock by rock, towards the base of Mount Suribachi, which had to be captured for use as an observation post before progress could be made to the north. After four days of hard fighting, on February 23, the Marines sent a scouting party to the summit and noticed that some of the summit’s defenders had retreated underground. Later that day, a forty-man combat patrol moved on the crest with grenades and bayonets. At 10:20 that morning, the patrol raised a small, 34”x28” American flag to signal the summit’s capture, much to the jubilation of the Marines across Iwo Jima. A few hours after this first flag raising, a larger flag, this one 96”x56”, was raised in place of the first one. This second flag raising was captured by Associated Press photographer Joe Rosenthal, and the image immediately became an iconic American symbol, both of the Pacific campaign and of Marine determination.

With Mount Suribachi captured as an observation point, Marine reinforcements began coming ashore to assist in the push northward, and Navy Seabees got to work repairing a captured airfield in the south. For days, Marine progress northward was measured only in yards, and brutal hand-to-hand combat and the use of flamethrowers and explosives were frequently needed to dislodge the Japanese defenders. American navy and air support, which also included Army fighters newly based on one of Iwo Jima’s airstrips, were also dispatched to support the Marines on the ground. By early March, the Marines had managed to split the Japanese defensive lines in two, then inched forward to overcome most of the Japanese strongholds and airfields remaining on the island. The last organized Japanese resistance was eliminated on March 11 at Kitano Point, but small pockets of Japanese defenders held out elsewhere as long as March 26, when one last banzai charge ended Japanese resistance on the island. Finally, after 36 days of brutal fighting, the Marines declared Iwo Jima secure.

With the capture of Iwo Jima, Allied forces took one big step closer to reaching the Japanese home islands. The island’s captured airfields were quickly put to use in the bombing campaign against Japan, and the first of over 2,200 B-29s used the island as an emergency runway on its return before the rest of the island was even cleared. This victory came at a steep cost, however. Almost 6,000 Marines were killed in action and many thousands more wounded, making the battle for Iwo Jima one of the bloodiest in the history of the Corps. Very few of the 20,000 Japanese defenders survived through the battle. But the strategic accomplishments of the victory almost pale in comparison to the battle’s importance in the history of the Marine Corps. Today, the victory on Iwo Jima is held by Marines as a legendary testament to the fighting spirit and capability of the Marine Corps, and the now-iconic image of the second flag raising remains an emblematic symbol of reverence throughout Marine Corps lore. The Marines were not the only ones to celebrate the remarkable victory from the determined Americans who took part. Admiral Chester Nimitz, shortly after the battle’s completion, famously observed similar notions when he was quoted saying, “Among the Americans who served on Iwo Jima, uncommon valor was a common virtue."